Trans and Non-Binary Resources: Singular "They"? 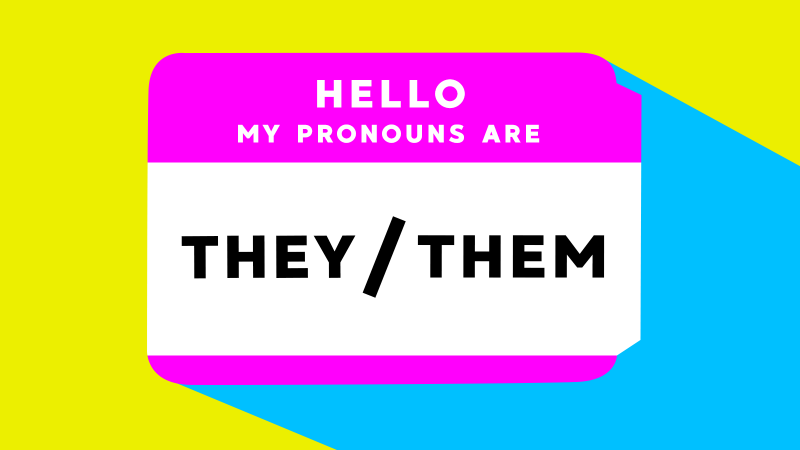 Earliest use of singular they

The Oxford English Dictionary traces singular they to refer to an unnamed person back to the medieval romance William and the Werewolf in 1375:

"If... a psalme scape any person, or a lesson, or els yt they omyt one verse or twayne." — William Bonde, Pylgrimage of Perfection, iii. sig. IIIiiiiv (1526)

"Upon which every body fell a laughing, as how could they help it?" — Henry Fielding, The History of Tom Jones, a Foundling (1749)

"Almost anyone under the circumstances would have doubted if [the letter] were theirs, or indeed if they were themself—but to us it was clear."
— Emily Dickinson, using the singular "theirs" and "themself" in a letter dated Sept. 24, 1881

"Nobody in their senses would give sixpence on the strength of a promissory note of the kind." — Lord Landsdowne in 1910, quoted in The Liberal Magazine (1914)

“She kept her head and kicked her shoes off, as everybody ought to do who falls into deep water in their clothes.”
— C.S. Lewis, using singular "their" in The Voyage of the Dawn Treader, published 1952

Singular "They" in Formal Writing

What do the major style guides say about singular they in formal writing?

In formal writing, don't use singular they to refer to a person whose gender is unknown.
Instead, reword for agreement in number.

​CMOS 17 doesn't prohibit singular they as a substitute for the generic he in formal writing but recommends avoiding it.

A pronoun should generally agree in number with the antecedent. Singular they is acceptable in limited cases when alternative wording is overly awkward or clumsy, but rewording is preferable.

Instead of:
Each student is expected to choose their topic.

Learn more about adjusting your language to be inclusive at MyProunouns.org.

Singular "They" For Non-Binary Individuals

Using an individual's chosen pronouns is affirming and respectful. Conversely, using binary pronouns for someone who uses non-binary pronouns, such as singular they, can be alienating and dismissive. For the non-binary person, this can feel marginalizing and even as though they are being erased altogether.

How do the major style guides address the issue of singular they for non-binary individuals?

Writers should follow the personal pronoun choices of individuals they write about, if their preferences are known, and editors should respect those preferences.

In stories about people who identify as neither male nor female or ask not to be referred to as he/she/him/her: Use the person’s name in place of a pronoun, or otherwise reword the sentence, whenever possible. If they/them/their use is essential, explain in the text that the person prefers a gender-neutral pronoun. Be sure that the phrasing does not imply more than one person.

Remember that AP style is intended for journalists and so is meant to be used in newspaper articles. It is concerned with clarity in writing that will be read by a large audience and must be understood by many people from different backgrounds.