4 Easy Ways to Respect Trans People in Our Language

It can seem intimidating when trying to understand how to be an ally to our trans community at Delgado, but here are four easy ways to let our trans faculty, staff, and students know with everyday language that they are respected and included.

Why Pronouns Matter for Trans People

We often assume a person's gender based on their appearance and then address them with the pronouns or honorific appropriate for that gender. But what if we assume wrong? We may end up misgendering that person.

"Using someone’s correct personal pronouns is a way to respect them and create an inclusive environment, just as using a person’s name can be a way to respect them. Just as it can be offensive or even harassing to make up a nickname for someone and call them that nickname against their will, it can be offensive or harassing to guess at someone’s pronouns and refer to them using those pronouns if that is not how that person wants to be known. Or, worse, actively choosing to ignore the pronouns someone has stated that they go by could imply the oppressive notion that intersex, transgender, nonbinary, and gender nonconforming people do not or should not exist."

What Is Gender Dysphoria and Why Does It Matter?

As many as 1 out of 3 transgender youths aged 15-21 report considering suicide.

Things aren't much better for adults, either. Researchers for a 2014 study found that: 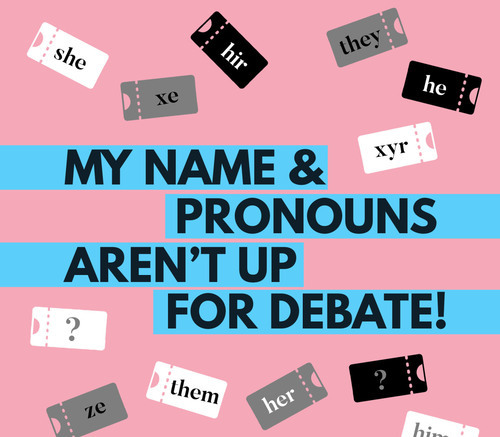 Even if it's an honest mistake, addressing someone by the incorrect pronoun or incorrect honorific (such as sir, ma'am, Mr., or Ms.) may make them feel that they are being disrespected or ignored. You may be trying to show respect by addressing faculty, staff, or students as "sir" or "ma'am," but for a transgender person who may often (and sometimes maliciously) be misgendered, these words can be unintentionally hurtful and excluding, making them feel unwelcome in our college community.

What should you do if you get someone's pronouns wrong?

That's a good question! While it can be awkward to use the wrong pronouns for a trans person, it happens, and it's okay. The best thing to do is apologize and move on. You may feel embarrassed and have the urge to go on and on about how sorry you are, but that will only make the person you just misgendered feel even more awkward or even that they have to comfort you!

Pronouns: How Do You Ask?

What It Means to Be Misgendered